A Martyr in the Archive: The Life and Afterlife of Harvey Milk’s Suit

Happy Birthday, Harvey. You would have been 84 years old. And yesterday was the 35th anniversary of the White Night Riots. The Texan was there and had this to say about that: “I was there. Much has changed. If I were in San Francisco today I would throw Flowers at City Hall!”

Hey, Hippie Birdy, Harvey. Here’s something for you: words, words, words…now glowing pixels maybe making a mark in the brightly-lit on-line world of today. No: no apologies. 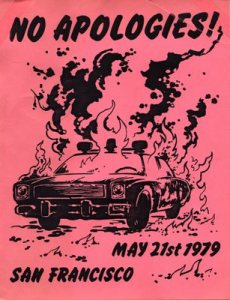 Just a preview. To download the pdf of the article A Martyr in the Archive: the Life and Afterlife of Harvey Milk’s Suit click here: JonesMartyrArchives

The Phlip-side of the Phelps Phamily – Gay-friendly Nate! – Son of Dying Phred…

Our hearts go out to the estranged children of infamous hate-mongerer Fred Phelps of the notorious Westboro Baptist Church, a pseudo-congregation made up primarily of members of his own family. Seems the old man, the patriarch of The Most Hated Family in America is dying. The father of thirteen children, four of those have severed ties. The man who terrorized funerals of AIDS victims and war victims with equal glee did not hold back with his own family. Son Nate Phelps has become an outspoken speaker on the topic of child abuse in religious organizations as well as an ally to and advocate for the Gay and Queer communities his father rallied against for so many years. Go, Nate! BTW, not all evil-ass cults are right wing. Religious abuse, like totalitarianism, can approach from the right OR the left. For a groovy take on THAT Cozmic Debris, just ask old Frank. Zappa, that is, baby snakes and yellow snow…

Sight seen outside a storage facility in Ukiah, in Mendocino County in Northern California. Back in the day, the NorCal economy was based on logging, plus fishing on the coast, some fruit and nut farming and some sheep and cattle ranching. Now, it’s vineyards in Marin, Sonoma and South Mendocino. Further north, Mendocino, Humboldt and Trinity counties comprise “the Emerald Triangle” – world-famous as a center of 420 culture, and prosperous due to an economy based on Marijuana cultivation.

What does THAT have to do with THIS photo? Let us translate. In the local jargon “This facility is used frequently as a training ground for law enforcement K-9 units” means “Don’t store your inventory here.” Word to the wise, no shit Sherlock and Duh! Enjoy your day and don’t let the doggies getcha!

Gay Activism and Iran: Do Western Activists Do More Harm Than Good? (Link to article by Scott Long)

Scott Long, LGBTQ human rights activist and visiting fellow in the Human Rights Program at Harvard Law School, just posted an article on Western LGBTQ activists and the purported “gay executions” in recent years in Iran, which I would recommend. While the LGBTQ and even mainstream Western press has reported several high-profile cases in recent years, Long believes that the situations may have been misrepresented, in some cases making things worse, and in some cases obfuscating matters. Long writes that

No one who launched the story has bothered to follow up the facts.

Among the observations that Mr. Long makes:

It’s certainly possible that the four men in Charam are “gay” or hamjensgara, and have been framed. It’s certainly also possible that they raped an “effeminate” victim, and that he is the one who suffered for sexual dissidence. Quite possibly, in fact, that’s the pattern underlying these stories of rape. In other words, conceivably [Western activists] have spent all these years speechifying and pontificating in support not of “gays,” but of their persecutors. The point is: We don’t know.

Agree or disagree, it’s worth reading and considering. What happens when we step in to “help” without having the full story? Does queer activism sometimes do more harm than good?

This disturbing story from Liberia on Huffington Post reveals that an anti-gay group in the country has published a “hit list” of LGBT advocates that they would like to kill. More disturbing, perhaps, is the complete silence of elected officials around the issue. According to Huffington Post, Liberia’s president Ellen Johnson Sirleaf vowed

Also disappointing to me, as a US citizen, is the lack of response from the US embassy in Monrovia. International pressure has certainly been helpful in compelling governments to be accountable around human rights issues in the past.
I’m hoping Liberian LGBT advocates will comment on this issue soon – I will publish updates as I get them.
-AidanAbroad 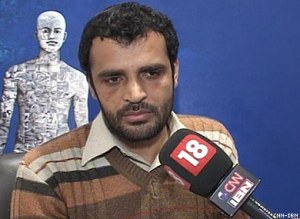 Balbir Krishan was attacked on January 5th in New Delhi, India at a gallery at the Lalit Kala academy, where he was exhibiting his work. The masked attacker kicked the double-amputee artist, destroyed one of his paintings, and shouted anti-gay slurs before escaping. Kick a gimp, ruin some art and run…sounds like a real stand-up guy. The show, called Out Here and Now, focused on homosexuality as a theme, and Krishan had been getting angry phone calls in the days leading up to the incident. More on this story from The Advocate’s Neal Broverman here. From the Hindustani Times article by Aakriti Sawhney, here. And for Cali Manga artist JoJo Mendoco’s take on war, gay life and lost limbs, click here. This last one is NSFW!

The police in Sacramento, California’s state capital, have some damage control on their agenda after the discovery of a cache of old fundraising t-shirts. The NAACP, who consider the controversial images part of a larger pattern of “violent behavior and misconduct,” are calling for an FBI investigation. The department had already been in the media eye after shooting suspect Tyrone Smith was killed in custody in late October. The t-shirts depict a small child in the Keane school of big-eyed kitsch kids clutching the bars of a jail cell accompanied by the caption “You raise ’em. We cage ’em.” They are funny, sad, insulting, bigoted, perverted, insightful, sick, twisted, wrong, right-on, et cetera, ad infinatum – and probably bringing in more money on eBay and the secondary market than they ever did originally.