Greetings from the Sunny South…

Is it is or is it ain’t…racist? What a difference a century makes. This grinning kid is long since dead. An early RPPC (Real Photo Post Card) it was posted from New Orleans to New York in May, 1905. The message reads: “Dearest Dorothy, we came here this morning and have seen lots of strange sights. This boy looks like a great many who walk the streets. It is lovely here. Flowers and birds like we have in August. Much Love from Aunt Mary.” This one is for Marc Owens. More on him here.

“Show Us Your Dick!” – throwing beads at boys off the Lafitte’s balcony

New Orleans’ Cafe Lafitte in Exile is the oldest gay bar in the country. It was once Tennessee Williams’ favorite watering hole. Located at 901 Bourbon Street in the Quarter, it is the destination for getting rid of all the beads collected in the carnivalesque rush toward Mardi Gras. Getting a spot close to the railing can be a challenge, but there’s some good show-offs in the bar as well. For a sweet-looking naked uncut bar-back and other cool pics of the first night out, click here.

…and The Krewe of Guns in Churches and the very vegetative Krewe Dite’ and other assorted Krewes, Walking and Rambling Clubs, Pleasure and Social Clubs and plenty of Brass Bandage. For more on the Krewe of St. Anne, click here. For “Show Us Your Dick!”- a slide show showing the throwing of beads at boys from the balcony at Lafitte’s, click here.

Uniforms, Bal Masque Gear, Formal Wear, Hats, Shirts, Beads, Boots and the most charming proprietor in the French Quarter in New Orleans. Marcus Fraser of Legarage at 1234 Decatur deals in Antiques and Clothing and so much more. The staff is also well-versed in arcane minutiae and very decorative to boot. Marcus is a well-known and beloved figure in town, around the Quarter and in the Bywater District, his home and home to the fabulous Krewe of St. Anne. Click here for much more on that! More still to come. These were taken on Ash Wednesday.

Mardi Gras in New Orleans: before the Krewe of St. Anne Procession

The Secret Society or Mystic Krewe of St. Anne is a walking club that was formed in response to the 1969 ban on rolling parades in the French Quarter. It is known for the elaborate costumes of the creative core group, which gathers before the march in the Bywater district. That group is joined by other parties along the parade route, which winds through the Faubourg Marigny and the Quarter. Here, sights seen before the march. Much more on Mardi Gras, tossing beads at boys and our gracious party host. Just click the links.

“The Society of Saint Anne is one of the best not-quite-kept secrets. Those in search of beads, breasts and beer best stay by Bourbon Street, as they will not appreciate the beauty and pageantry of this walking club. But those needing a respite from the unimaginative verbal assaults, the stench of urine and groping crowds need only walk one block out of the Quarter on Tuesday morning.

The R Bar, at the corner of Royal and Kerlerec, is one of the many hosts that will greet, with open arms and libations, the magic. For certain, the Society of St. Anne dispenses magic from its first strut beginning in the Ninth Ward and along its path through the old neighborhoods eager to receive the walking procession’s good cheer.

It is this corner, just outside the Vieux Carre, that seems to marry and unite the neighborhoods on both sides of Esplanade. And for those joining the regalia’s ranks, it is a welcomed culture shock. The wanna-be Mardi Gras of crassness is left behind and replaced by theater. Venetian vintage capes and gowns of velvet adorn those whose identify is masked in the commedia dell’arte tradition. Papier-mâché creatures prance, fairies flit, cowboys and cowgirls ride tall on galloping bicycles, and renegade feathers float among Elvis kings and six foot queens.

The Society of Saint Anne’s wending from somewhere in the Bywater to Royal, and on to Canal Street to greet the Rex parade, has become pretty much public domain – with folks flocking to watch and join in. Those in the know say that sometime during the ‘80s, the procession began going down to the river after viewing Rex. Initially this was to honor those friends within the Society of St. Anne that had succumbed to AIDS. There at the river, their ashes would be tossed into the Mississippi’s currents. This practice of casting the ashes of those friends wishing one last fling with the Society is tradition now.

This Carnival walking club is not always forthcoming about its precisian – it is, of course, a secret society. But in recent years, a few well-chosen interviews have been granted. From these and from guarded word of mouth, certain facts are as follows. In 1969, Henri Schindler, author (most notably of the definitive text, Mardi Gras, New Orleans), Carnival designer, historian and true devotee of Mardi Gras began the Society of St. Anne along with friends Paul Poche and Jon Newlin. The inception of the society began as a reaction to the ordinance that banned the old-line parades from the Vieux Carre.

The naming of this band of costumed marchers apparently was inspired by the trio’s discovery of a tomb in St. Louis Cemetery No.1 honoring the Societe’ de Sainte Anne, a benevolent society founded by the Sisters of Charity. And from the quiet of a cemetery grew a vibrant and colorful tradition.

While this caravan of revelers has grown from the imaginations of three to easily over 2000 costumed participants on Mardi Gras Day, the core group is rumored to number around 200. It is this creative core that plots and plans throughout the year with parties, a rumored ball and extensive work creating the exquisite costumes and their signature hula-hoops flowing with ribbons from atop tall poles.

And while much has been written and discussed of the Society of Saint Anne, make no mistake, this organization holds fast to its tenets – secrecy being foremost. Just ask one too many questions, and you will receive a smile, but with it a coy yet firm “No comment.””

Shotgun is the style of architecture. The dragon bit is obvious.

Key in the Asphalt Road…a metaphor for Gay Highwaymen? 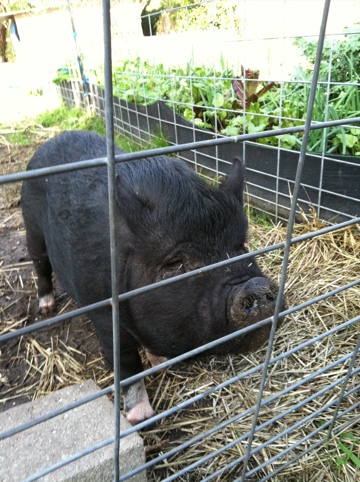 The Zulu Social Aid and Pleasure Club, informally known as the Krewe of Zulu or just the Zulus, is a NOLA institution going back to 1909. The black krewe is named after Africa’s Zulu people, well known for their unbreakable spirits and ferocity in battle. Zulu’s signature hand-made painted coconut throws are probably the most sought-after throw of Carnival season. The Zulus host a festival down by the river on Lundi Gras. For another taste of the festival, click here. For the famous walking statue man, here. Hail, Zulu!