A bird? A plane? A nerd? A clone? No! It’s Shame on 8 Man! Sight seen in the very festive Castro district.

Cool Franciscans at the demise of DOMA celebration… 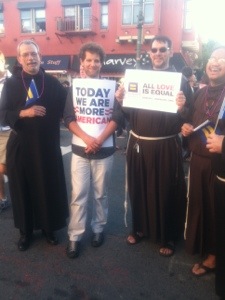 God loves all His children. And if it ain’t Love, it ain’t God. Thanks to Tim’m T. West for that one. Sight seen at the ongoing celebration in San Francisco’s Castro District. DOMA is overturned and so is Prop 8!

Posted on June 27, 2013 by gayhighwaymen in Uncategorized

Boulder Daily Camera gets the Picture, but Prop 8 overturn is not a Dunn Deal.

Everyone, from legal eagles to the peanut gallery, agree that this will go to the US Supreme Court. Meantime, let the celebration commence! Friend of the site Aidan Dunn shows the back of his head in this shot. From the well-named Boulder Daily Camera out of Colorado. News of the same day: the dismissal of Lt. Choi under DADT. Ironic juxtaposition. The nation watches.

Update: the back of Aidan’s head gets famouser and gaymouser by the minute. The photo was printed in papers in Mexico, India and other foreign and remote locales. Closer to home, the dubious honor of the front page above the fold of the USA Today.