From pal of this site, Big Gay Al. Word from his groovy Rabbi, who loves on the queer Tribe and the goy gays both. The cool Franciscans dig us, too. Righteous faith communities have been at the forefront of our struggle for a long time. As whip-smart homo-hopper and site-pal Tim’m T. West has said: “If it ain’t Love, it ain’t God.” Word! Thanks for this, Al! Rabbi Avi Schulman is at Temple Beth Torah  in Fremont, California. Such a mitzvah!

A WORD FROM RABBI SCHULMAN:

On Wednesday I rejoiced when I learned that the Supreme Court’s had decided to nullify the Federal Defense of Marriage Act.   As a result of this ruling, gay and lesbian married couples will receive equal protection and benefits under the law as do heterosexual married couples.   I was further gladdened when the Supreme Court declined to overturn the decision by a federal district court invalidating Proposition 8.  In doing so, it is expected that within a month same-sex couples can marry in California.

It has been a long, hard struggle to reach this point in our society.  As a heterosexual male, I have not been subject to the intense discrimination if not outright hatred that gays and lesbians, bi-sexual and transgendered people have experienced.  But I have encountered intense resistance to granting any legitimacy to those who are LGBT.  Some years ago, I gave a sermon advocating for gay rights.  In response, I received the following letter:

I hope your Temple isn’t caught up in supporting homosexual rights!!  God in the Old Testament has never approved of the homosexual life style.  In fact they were to be taken outside the gates of the city and stoned.  Also, Sodom and Gomorrah were destroyed.

Remember, homosexuals are filthy people and have filthy practices.  No wonder they have AIDS and thanks to them, heterosexuals have it, too.  Don’t give them any rights!

A lot of Jews and Christians are homosexuals because they didn’t bond with a Dad.  The Dad’s too busy for them and they are just around women and get too feminine.

A lot of Jewish boys too are homosexual because they got pampered in the city.
Do not grant homosexuals any rights.  Follow God’s way and not Sodom’s way!”
The repulsive attitude, the appalling ignorance, and the sheer bigotry of the writer of this letter are reprehensible.  But make no mistake, even today there are still people in our society who would agree with these sentiments.

Yesterday’s rulings by the Supreme Court represent landmarks in the fight for equal rights for gays and lesbians in America.  However, there is still much more work to be done.   More than thirty states do not allow same-sex marriage.   However, through education and advocacy, we can help ensure that LGBT couples can marry in every state in the US.

Our Torah proclaims that each human being is unique and precious, endowed with the spirit of the Divine.  Our prophetic tradition urges us to strive toward creating a society that is just and righteous.   Amos the prophet proclaimed:  “Let justice roll down like waters, righteousness like a mighty stream.”  Wednesday’s landmark decisions by the Supreme Court felt like a waterfall of refreshing water that washed over our land.

Groovy! I think he is going to say yes. The Phelps don’t like it, though. Poor things. Photo via cool vintage gay singer/songwriter Blackberri and the Son of Baldwin blog – the literary, socio-political, sexual, pop culture blog live from Bedford-Stuyvesant.

Dunn on the Farm: “God Bless All Marriages” – A Report from the Stanford Daily. 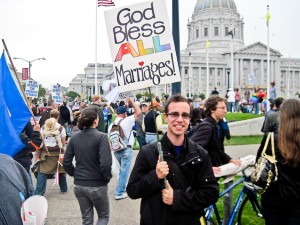 “Today is a great day,” Dunn said. “For me personally, it means that someday I might be able to marry the person that I love. What I hope it means for the community is that we start fighting for more queer and social justice issues.” For the rest of the story, visit the Stanford Daily online.  [Photo courtesy Aidan Dunn]

Boulder Daily Camera gets the Picture, but Prop 8 overturn is not a Dunn Deal.

Everyone, from legal eagles to the peanut gallery, agree that this will go to the US Supreme Court. Meantime, let the celebration commence! Friend of the site Aidan Dunn shows the back of his head in this shot. From the well-named Boulder Daily Camera out of Colorado. News of the same day: the dismissal of Lt. Choi under DADT. Ironic juxtaposition. The nation watches.

Update: the back of Aidan’s head gets famouser and gaymouser by the minute. The photo was printed in papers in Mexico, India and other foreign and remote locales. Closer to home, the dubious honor of the front page above the fold of the USA Today.

Ernesto Rodriguez Larrese and Alejandro Vanelli celebrate with friends in Buenos Aires, Argentina, Friday, July 30, 2010. Larrese and Vanelli are the first gay couple to marry at the Argentine capital under a new law that makes Argentina the first country in Latin America to legalize same-sex marriage. [AP Photo]