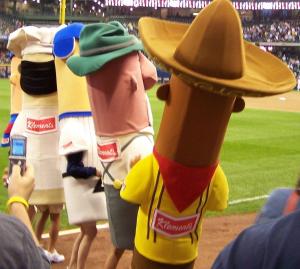 Our correspondent AidanAbroad blogged about Milwaukee’s strange tradition of Sausage Racing at Brewer’s games. Check it out here. His iPhone couldn’t get a good zoom, though. A quick trip around the internet solves that. Here are the sausages getting ready to…uhhh…race!

Can you hear me NOW? I’m Gay. The Verizon Guy is coming out!

After nine years in a corporate closet, Paul Marcarelli is coming out as gay. The horn-rimmed spokesman for Verizon talked to Spencer Morgan of The Atlantic about the contract that has sealed his lips for the past decade. It had what amounted to a no self-outing clause. Anonymous mascots are not supposed to have lives that could publicly detract from the characters they play. And being gay is still good dish, way too juicy for the bean-counters to risk. Homophobia blurs with the bottom line. Marcarelli’s catch phrase “Can You Hear Me Now?” will certainly go down in the history of TV advertising slogans – along with other pervertable classics such as: “Where’s the Beef?” “Don’t Squeeze the Charmin'” and “You’re soaking in It.” Marcarelli is currently in post-production on The Green, a film he wrote and co-produced and which focuses on a small-town gay couple who become embroiled in a scandal. Look forward to it on the festival circuit. The Atlantic article is available here.

Another Giant Lumberjack on US 101

Icons often outlast their inspirations. Lumber and fishing long since gave way to wine and weed in California’s Mendocino County. This restaurant mascot lumberjack walks roadside forever in Willits. And he’s not the only giant lumberjack on the 101: here is another.