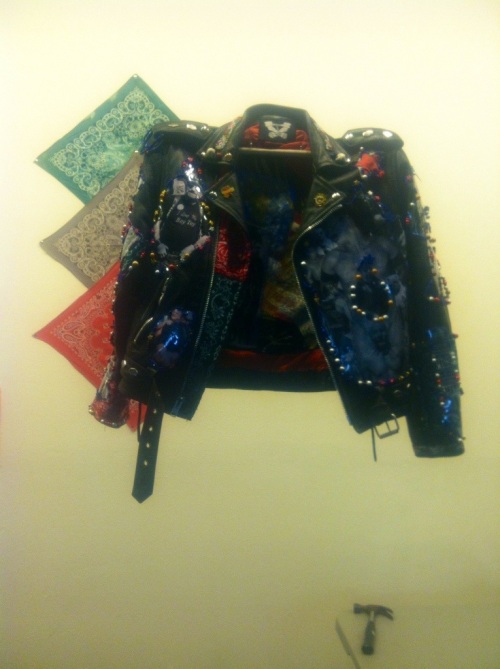 The Mayor of Folsom Street! The exhibit at the Center for Sex and Culture opens on Friday and this is installation week. So, here’s the sneak! Above, memorial Leather Jacket by Bill Bowers. Bill is a former Cockette and long-time Queer Underground couturier. Cool art kid Rik Lee is doing his website these days. Check it out! He’s even done stage wear for Keith Richards the Rolling Stone. Dig! Alan dressed Metal bands and did foundation garments for punk fashion queen Vivienne Westwood, so having Bill’s tribute jacket as a centerpiece for this show is pure copacetic. 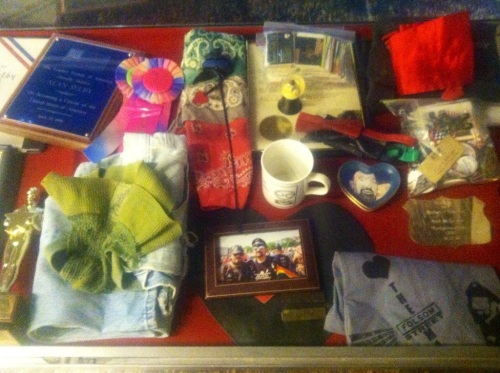 An assortment of “smalls” – prior to installation. Lots of stories, here!

Worn Levi’s 501s, the crotch has been mended with leather and has worn through yet AGAIN! Damn, Dad. With Malebox jockstrap and an assortment of “friendship” pins, including one from The 15 Association. Alan, the original “Mr. S” was at the founding meeting, and was a long-time honorary member of this 35 year-old San Francisco-based men’s S/m fraternity.