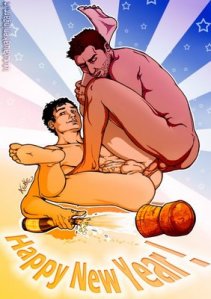 It’s not such a small world, after all. This ciao! to the new year is from Awakening Art, the site of an Italian illustrator who makes, collects and promotes gay erotic comics and illustrations. Many, like this one, are influenced by the Japanese manga genres of Yaoi, or boy’s love, and Bara, or Gai Comi, which features older, tougher characters and scenarios. The term Bara probably came from Bara Kei or Ordeal by Roses, the title of a 1961 book of semi-nude images of gay author Yukio Mishima by photographer Eikoh Hosoe. Barazoku was the first mainstream gay magazine in Asia, and began publication in 1971. And since the 1980s, the term bara-eiga or rose film has been used to describe gay cinema. Look forward to some genuine Japanese Bara on this site in 2011. Meantime, open up, enjoy the ride…and pop a cork! Ciao!