An ancient ritual: Beating the Bounds for Gangdays…and whipping some boys on the way. 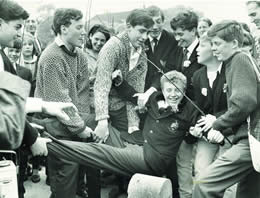 Beating the Bounds: an ancient ritual still practiced today in the British Isles. Communities traditionally reinscribed the boundaries of their parishes by walking the edges carrying sticks, pounding on the boundary marking stones. In an era before maps were common, when literacy was rare, these annual events (also called “gangdays”) were intended to impress upon everyone where community boundaries lay. Since resources were allocated according to parish, it was vital that the knowledge was passed down accurately though successive generations. It also helped keep the neighbors in line. To reinforce the lesson, the gangs would (and d0) stop occasionally to literally beat the knowledge into the boys. Sometimes, the youngsters would also be flung against the rocky stiles. All in good fun! Part of a suite of jolly old British customs that includes flogging the peg boys.