Oakland in the News: Injured Marine Protester, Disgruntled Police, Anonymous, and of course, the #GeneralStrike 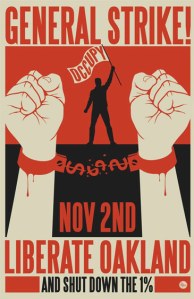 On the eve of a General Strike in Oakland, California Marine Veteran Scott Olsen is recovering from critical head injuries sustained at the hands of the police, who had been ordered by Mayor Jean Quan to break up the ongoing Occupy Oakland encampment. Internet freedom fighters Anonymous sent him an anonymous, text-based get-well video in which they condemned the police action, saying: “The honor and courage you have displayed on the battlefield is only overshadowed by the cowardice and dishonor displayed by those who have committed these inhumane crimes against you.” Meantime, Oakland Police have expressed frustration with the apparently mixed messages coming from City Hall.

In an open letter to the citizens of Oakland released earlier today, the Oakland Police Officers Association stated:

We represent the 645 police officers who work hard every day to protect the citizens of Oakland. We, too, are the 99% fighting for better working conditions, fair treatment and the ability to provide a living for our children and families. We are severely understaffed with many City beats remaining unprotected by police during the day and evening hours.

As your police officers, we are confused.

On Tuesday, October 25th, we were ordered by Mayor Quan to clear out the encampments at Frank Ogawa Plaza and to keep protesters out of the Plaza. We performed the job that the Mayor’s Administration asked us to do, being fully aware that past protests in Oakland have resulted in rioting, violence and destruction of property.

Then, on Wednesday, October 26th, the Mayor allowed protesters back in – to camp out at the very place they were evacuated from the day before.

To add to the confusion, the Administration issued a memo on Friday, October 28th to all City workers in support of the “Stop Work” strike scheduled for Wednesday, giving all employees, except for police officers, permission to take the day off.

That’s hundreds of City workers encouraged to take off work to participate in the protest against “the establishment.” But aren’t the Mayor and her Administration part of the establishment they are paying City employees to protest? Is it the City’s intention to have City employees on both sides of a skirmish line?

It is all very confusing to us.

Meanwhile, a message has been sent to all police officers: Everyone, including those who have the day off, must show up for work on Wednesday. This is also being paid for by Oakland taxpayers. Last week’s events alone cost Oakland taxpayers over $1 million.

The Mayor and her Administration are beefing up police presence for Wednesday’s work strike they are encouraging and even “staffing,” spending hundreds of thousands of taxpayer dollars for additional police presence – at a time when the Mayor is also asking Oakland residents to vote on an $80 parcel tax to bail out the City’s failing finances.

All of these mixed messages are confusing.

We love Oakland and just want to do our jobs to protect Oakland residents. We respectfully ask the citizens of Oakland to join us in demanding that our City officials, including Mayor Quan, make sound decisions and take responsibility for these decisions. Oakland is struggling – we need real leaders NOW who will step up and lead – not send mixed messages. Thank you for listening.

No word yet from Mayor Quan’s office.

2 responses to “Oakland in the News: Injured Marine Protester, Disgruntled Police, Anonymous, and of course, the #GeneralStrike”