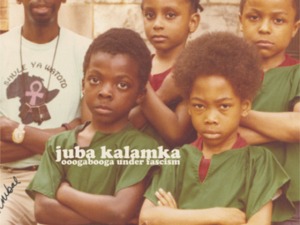 Juba Kalamka is a 21st century African-American renaissance man, a one-time bougie boho post-pomo afro homo* with a vita that includes being a founding member of the seminal homo-hop group Deep Dickollective, a featured role in Alex Hinton’s 2005 documentary on the homo-hop scene Pick Up the Mic, and ongoing work as a bi/sexual activist, speaking, writing and appearing in films. His lyrics will also be included in the Yale Anthology of Rap, to be released in the winter of 2010. The anthology contains lyrics from the Ooogabooga Under Fascism album track Yeoman Johnson, academic essays by Kalamka, and a song from his previous group project, Deep Dickollective.

Kalamka’s current project is called “Ooogabooga Under Fascism.” A multimedia project, it will include cds, chapbooks, 7″ vinyl 45 rpm records, and assorted ephemera, including stickers. He is raising completion funds through kickstarter.com. Kickstarter is an on-line project for funding-raising for creative projects.

The album cover features a very young Kalamka. Four children look directly into the camera’s gaze. Its focus is intense. They return its intensity fearlessly . These are kids coming up in a particular educational environment at a unique moment in time. The place, Chicago, near Douglas Park in the North Lawndale neighborhood. They are being schooled in, among other things, a certain strategic fearlessness in the face of a powerful, always potentially hostile, white gaze.  The children wear colors of pan-Africanism, the red and green that represent blood and  life. The adult figure is cut by the photographic frame at the face. His gaze is concealed, although his position and influence are clear.

The Gay Highwaymen talked to Kalamka, who said that: “Thematically, Africentricity and Black Nationalism and how they shaped my later politics, identity formations and aesthetics are a part of the theme of the album.” A short interview follows.

GH: I didn’t pick up on little Juba at first. Fierce! Great photo. Shule Ya Watoto was your school, right?

GH: How old were you?

GH: It was associated with Malcom X College of Chicago?

JK: Shule Ya Watoto at one time belonged to CIBI (Council of Independent Black Institutions) of which Uhuru Sasa (NYC) and IPE/New Concept Development Center (Institute Of Positive Education) were affiliated as well. The Shule was co-founded by Hannibal Afrik (the adult in the photo, upper left corner) who most recently ran Community Youth Achievers/Environmental Village Campus in Hermanville Misssissippi. Malcolm X College is actually one of The City Colleges of Chicago. It is the former Wilson Jr, College which has been around since the 1940s, but was re-named Malcolm X in 1971 when the new campus opened. “Malcolm” as it’s affectionately known in the community, has been ground zero for Kwanzaa events and Africentrist anything on the west side of Chicago since around 1973 or so. I’ve been there for some event or other every year since about 1976 or so, the last time this past June.

GH: What about the title “Ooogabooga Under Fascism”?

JK: “Ooogabooga Under Fascism” is taken from a quote by Illinois Black Panther Party Chair Fred Hampton. Hampton had been indicted by a number of members of cultural nationalist organizations because the Panthers didn’t wear the popular quasi-african garb (dashikis and the like) or have African names. Hampton responded by saying (paraphrasing) that if one was in a room that was on fire, that your politic would not be a dashiki- it would be a bucket of water.

He saw nothing wrong with African names and such, but he thought the criticism was short sighted- saying in (another paraphrase) that if he changed his name to “Ooogabooga” and didn’t do anything about the fascist conditions that he lived under, that he would in effect be “Ooogabooga under fascism”**

The message has lost no political vitality. On a another note, Juba pointed out in reference to the cover photo: “…how insanely jealous I was of Osei’s afro. My mom kept cutting my hair!!”

For details on how to support this project, go to his Kickstarter site.

For more on Juba Kalamka, read an Amoeba interview by Billy Jam here.

*From the Deep Dickollective album of the same name.