Hot (the bad kind) in the Mission

A building across the street from mine (at Duboce and Valencia) went up in flames this morning. 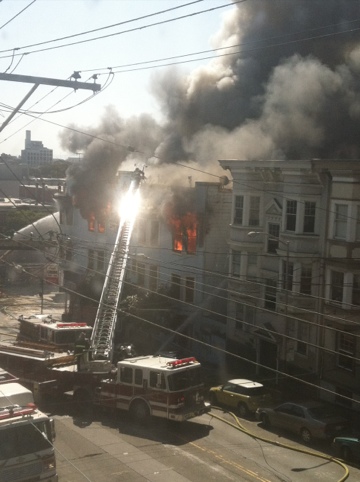 According to this Mission Local article, four firefighters and one resident were injured in the four-alarm fire. Many of my neighbors (and their children and pets) who had been evacuated from their buildings were just sitting out on the sidewalks all morning, watching firefighters battle the blaze. This article on SFGate reports four people injured and 37 left homeless.

The corner building is toast, and the one next door on Valencia is severely damaged. The one next door on Duboce has a giant black spot on the side and some broken windows, but my neighbor who lives there said her apartment appeared fine at first glance, other than a heavy smoke smell. At least two local businesses, Fred’s Liquor and Deli and Cesar’s Cafe also sustained serious damage and are now closed.

The cause is still unknown, but since it took them over 2 hours to put out, and flames just kept shooting out of one particular area of the building, I wonder if a gas line or something similar could have been involved.

For hours, 4 blocks surrounding the area were blocked by police cars, and traffic was diverted. Duboce has reopened to traffic, but a fire engine remains onsite, and that block of Valencia remains closed. The river of water that was pouring down Duboce is gone, but the air still smells like burnt building.

Many thanks to the firemen (and one firewoman that I saw) for their hard work this morning – they responded quickly, spent several grueling hours in precarious positions on ladders an rooftops trying to contain the flames, and 4 of them sustained injuries.

I have heard that the Baha’i Center is giving displaced people a temporary place to go – and if I hear of ways to help out, I’ll post them here.